15 Fun Facts About Costa Rica like the Rainforest, Animals, and Food 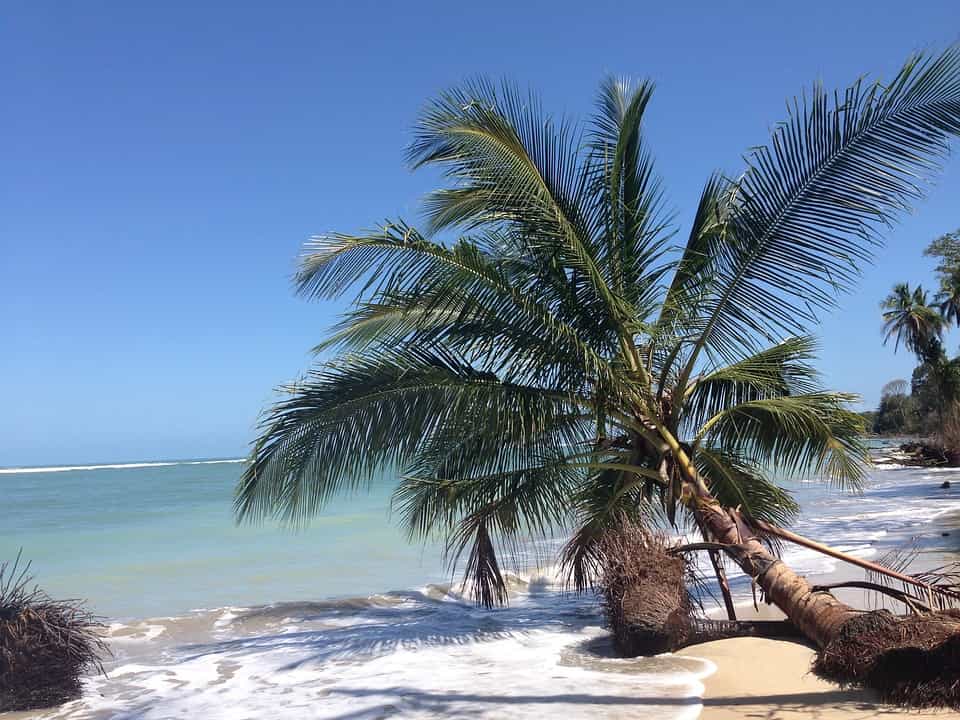 What are some fun facts about Costa Rica?

1. Where is Costa Rica located? 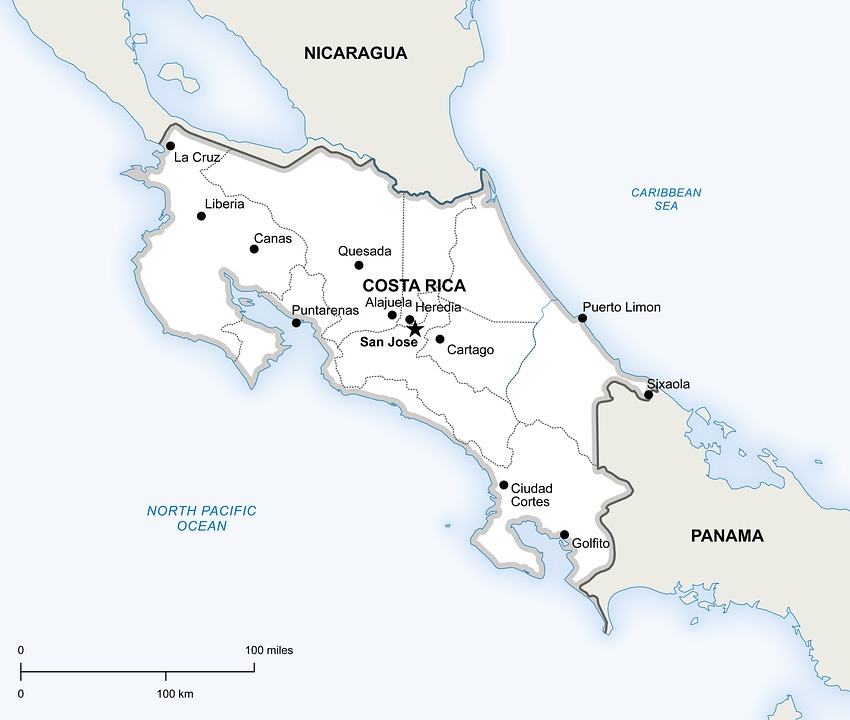 Is Costa Rica located in Mexico? Although Mexico is the biggest part of Central America, Costa Rica is it’s own country. Just like Belize, Guatemala, El Salvador, Honduras, Nicaragua and Panama. Some of the cities in Costa Rica include San Jose, Liberia, Tamarindo and Limon.

Here are some interesting facts about San Jose, Costa Rica. San Jose is the largest city in Costa Rica and is also the capital. It’s located in the Central Valley area of Costa Rica. Some of the things you’ll see there are plush green land, coffee plantations and two volcanos. The volcanos are named Poas and Irazu. The name San Jose means Saint Joseph and named after Joseph of Nazareth.

The city originated in 1738 and became the capital in 1823. The San Jose, Costa Rica population is close to 1.5 million. San Jose’s land area is a little over 17 square miles. You’ll find plenty to do there with all the restaurants, shops and some of the best attractions.

Check rates and availability for places to stay in San Jose 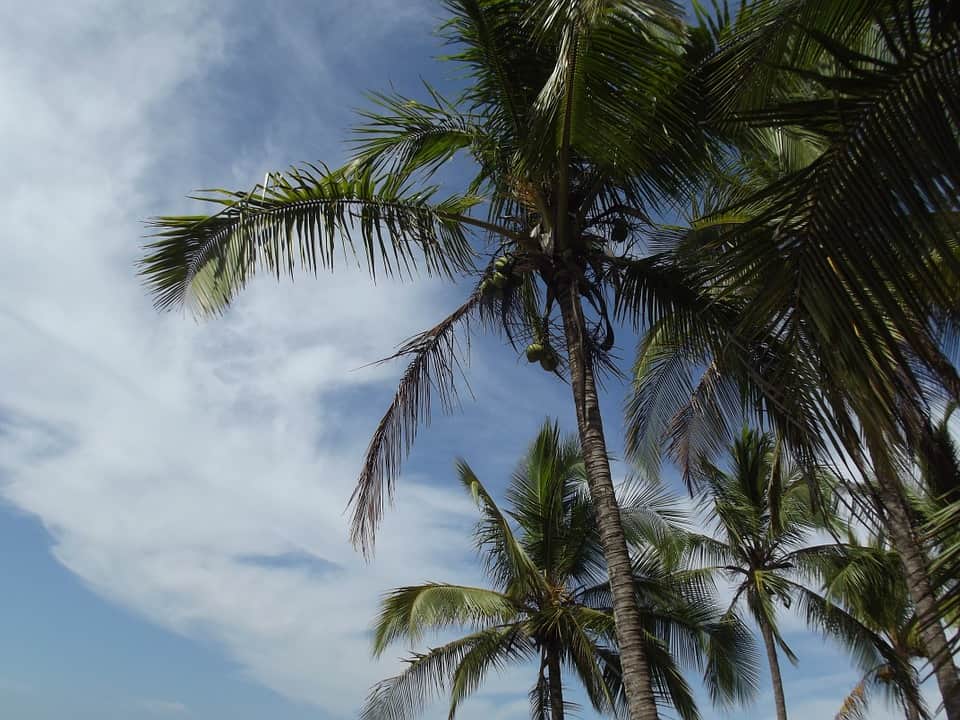 If you head over to the Pacific coast near Guanacaste though, the weather is more hot and dry. Great for enjoying the beaches. The best time to go to Costa Rica would be in the dry season, which is from the middle of December to April. It’s a great time for checking out the rainforests and enjoying some good beach time. 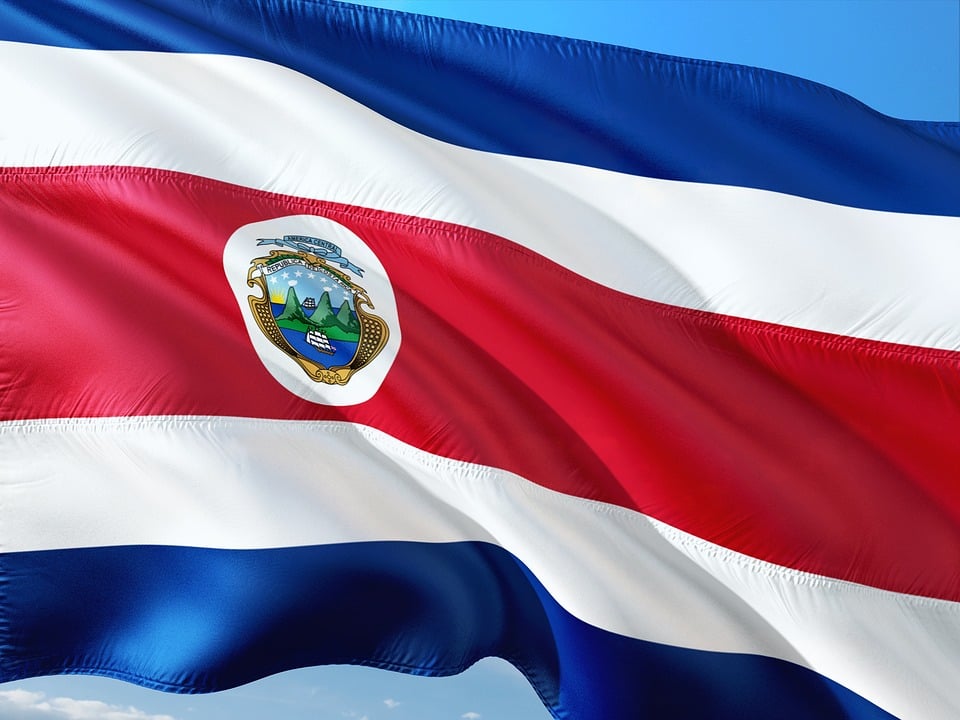 It has five horizontal bands which are blue, white, a double width red, white and blue. There’s also a coat of arms simble on the left side of the red. The blue in the Costa Rican flag represents sky, idealism, opportunities and perseverance. The white represents peace, wisdom and happiness. The red represents the blood that was spilled by the martyrs that were defending the country.

It also represents the warmth and generosity of the people. They revised the coat of arms in 1848 and put it in the center of the flag. The coat of arms has three volcanoes that stand for Costa Rica’s three mountains and a valley. They divide the two oceans where there are ships sailing. They represent the sea ports of the Caribbean and the Pacific Ocean.

The currency of Costa Rica is called a colon. It’s named after Christopher Columbus, which in Spanish is Cristobal Colon. The plural for this currency is colones. In some places of Costa Rica, they call 500 colones a dollar. When you’re in Costa Rica, you can use US dollars, but it’s not a bad idea to have some local currency on you to use also.

There are a few different ways that you can change your money. One way is to bring some US cash, and when you pay for something get change back in colons. You can also get colons from an ATM with your debit card. Or when you get to Costa Rica, you can exchange your money at a local bank.

Tamarindo is one of the eleven cities in Guanacaste, which is one of Costa Rica’s seven provinces. It’s located on the Pacific coast and has some of the best beaches in Costa Rica. Like Playa Grande which is located toward the north. It’s a great place for surfing and also the famous nesting spot for the leatherback turtles. Then there’s Playa Langosta which is a located toward the south of Tamarindo.

It has mini beaches that are divided up by rock formations. In Tamarindo you can enjoy the blue water, the white sand and some great weather year round. You’ll also find plenty of shops, restaurants and a lot of fun things to do. It’s a great place to go for a first time visit.

Check rates and availability for places to stay in Tamarindo

Liberia is another city in Guanacaste province, Costa Rica and also Guanacaste’s capital. It has one of Costa Rica’s four international airports. Which is the Liberia International Airport. The city’s known as the white city. It’s been called that because of the white gravel that they used a long time ago to make the city’s roads.

Also because of the whitewashed colonial houses that they use to have a lot of. There are plenty of things to do in Liberia. You can enjoy the shops, restaurants and the beaches along Guanacaste’s coast. Also the Rincon de la Vieja National Park which has trails, peaks, waterfalls, hot springs and more. Then there’s also Africa Mia which is an African Safari Adventure Park.

Check rates and availability for places to stay in Liberia 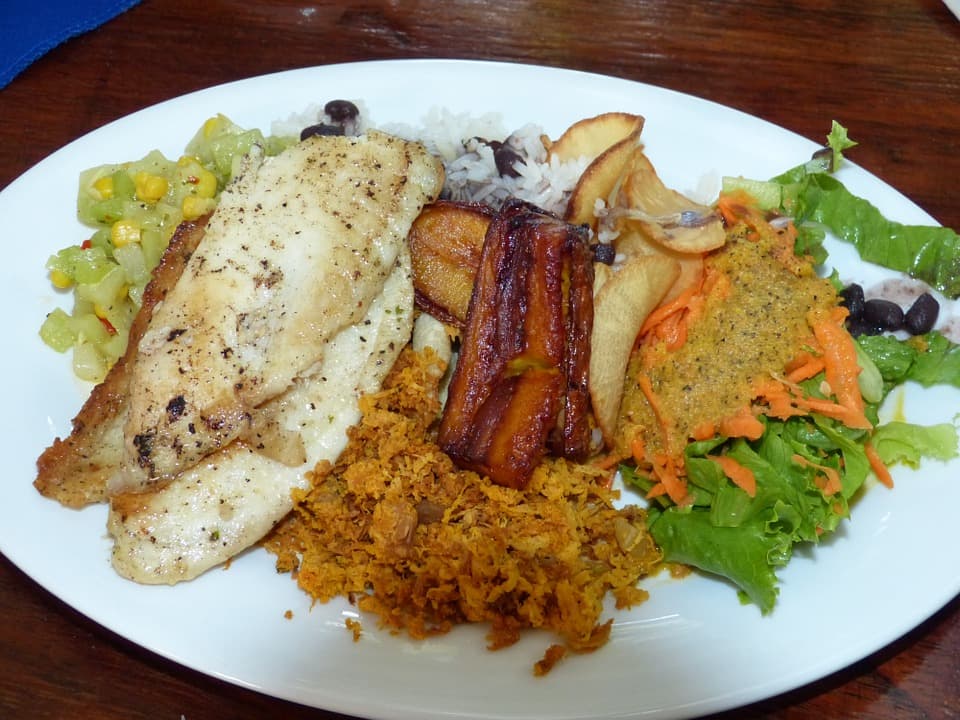 One of the Costa Rican food dishes that you’ll find in Costa Rica is a plate called gallo pinto. What it is, is a mixture of rice and black beans, and sometimes it also has plantain, scrambled eggs and some kind of meat. It’s common to have this for breakfast. Costa Rican’s usually have a cup of coffee or some fresh fruit juice with it.

What’s most common for lunches and dinners is a dish called casado. It has a type of meat like beef, chicken or fish, rice and beans, fried plantains, a side salad and a fruit drink. Fruit drinks might be refrescos which are smoothies made with water or milk. Or agua dulce which is water sweetened with sugar cane. 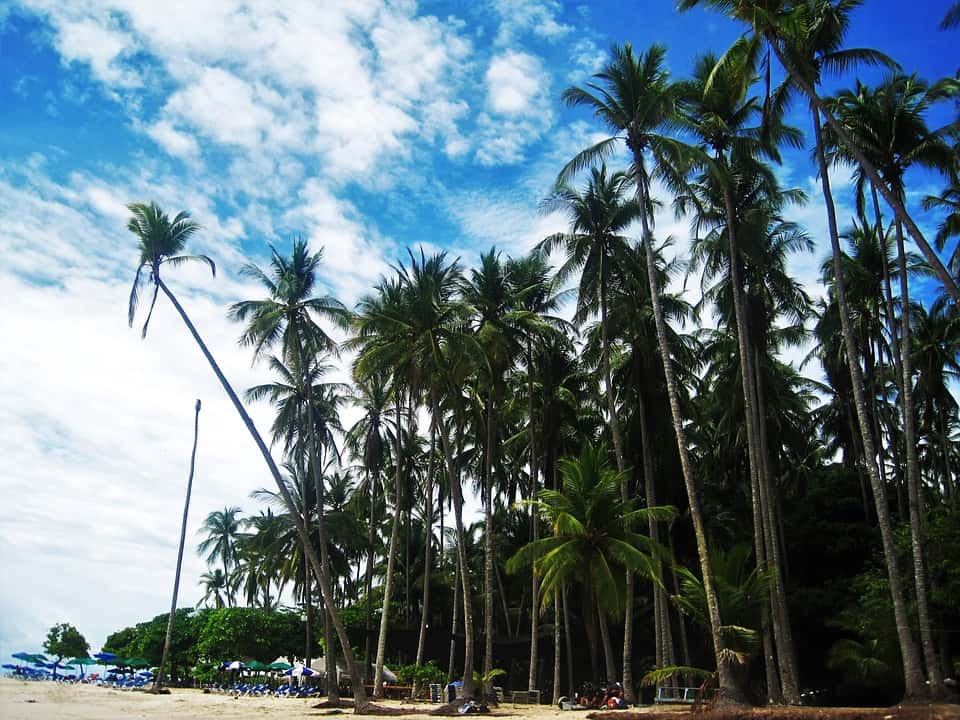 Have you ever thought about taking a trip to Costa Rica? If so, here are some answers to some common questions. You might wonder is it safe to travel to Costa Rica? There can be thieves, so don’t carry a lot of cash or wear a lot of jewelry. If your hotel room has a safe, put your valuables in there. Just be aware of your surroundings. 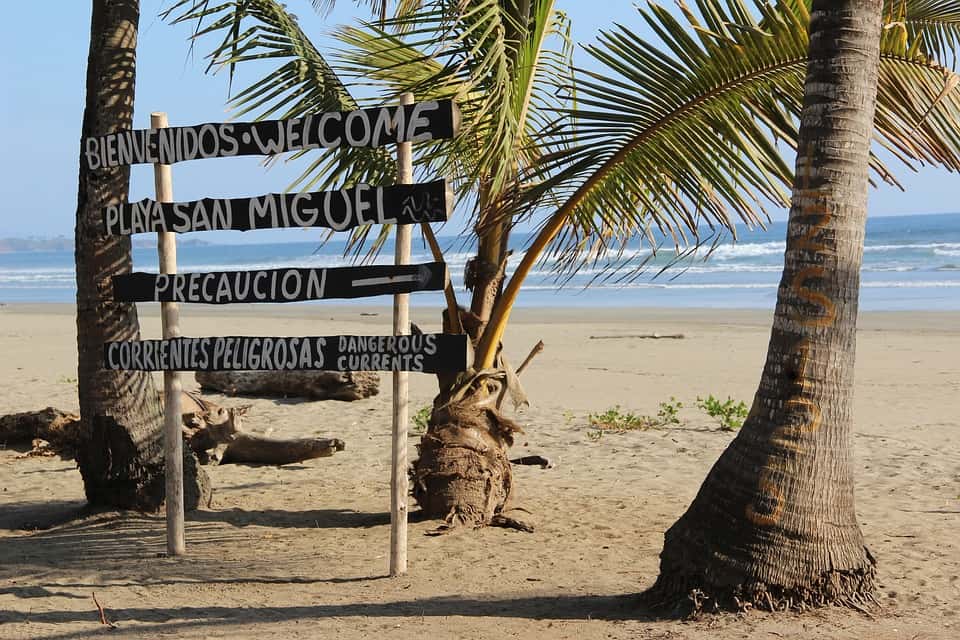 There are almost 800 miles of coastline and 300 beaches in Costa Rica. Including Manuel Antonio, Playa Conchal, Tamarindo, Playa Flamingo, Santa Teresa and Punta Uva. The water in Costa Rica is warm all year long. One of the most beautiful beaches with soft white sand and clear water would be Playa Conchal. It’s on the pacific side in Guanacaste.

Great for swimming, snorkeling and enjoying the beach. There are also black sand beaches that you’ll find on Playa Negra. It’s also in Guanacaste on the Pacific side. There are plenty of beaches to choose from in Costa Rica. If you like scuba diving, Catalina island is one of the best spots for that. It’s located just north of Guanacaste.

Check rates and availability for places to stay in Guanacaste 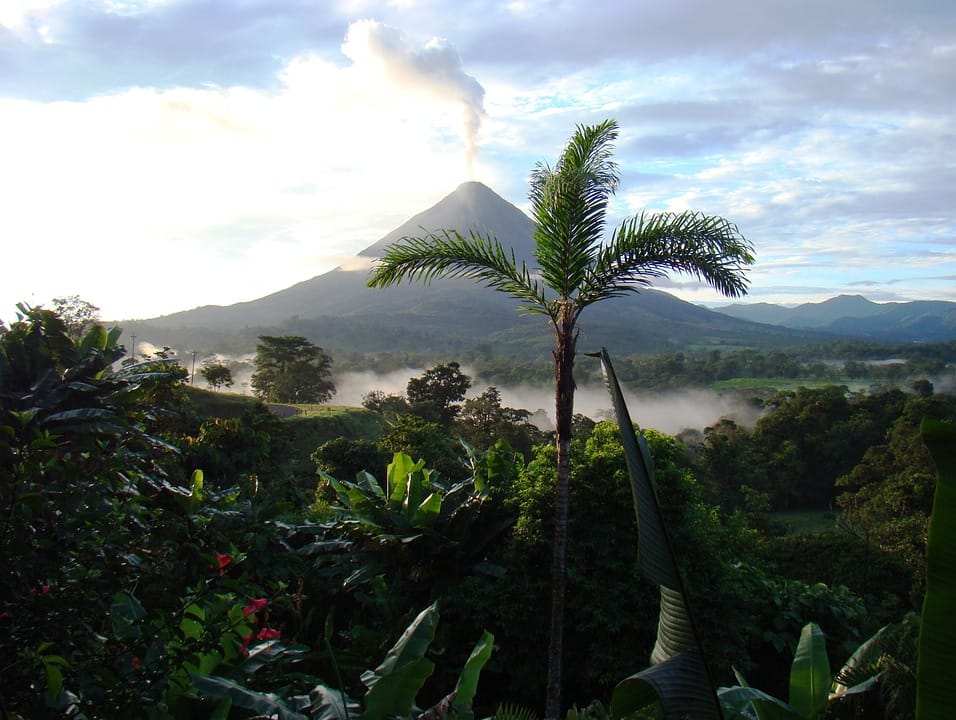 Hawaii’s not the only place that has volcanoes. Costa Rica has six that are active, and 61 that are either dormant or extinct. They can be a lot of fun to visit. The one that’s been the most popular is one called Arenal which is the most well known one in Costa Rica. It’s been dormant since 2010. Arenal is located in the Arenal Volcano National Park in the city of La Fortuna.

You can get close to it, but you can’t climb it. Some other ones to see would be Poas, Rincon de la Vieja, Irazu and Turrialba. The one that most recently erupted was Turrialba. One of Costa Rica’s biggest volcanoes. It last erupted in April of 2017.

12. Do they speak English in Costa Rica? 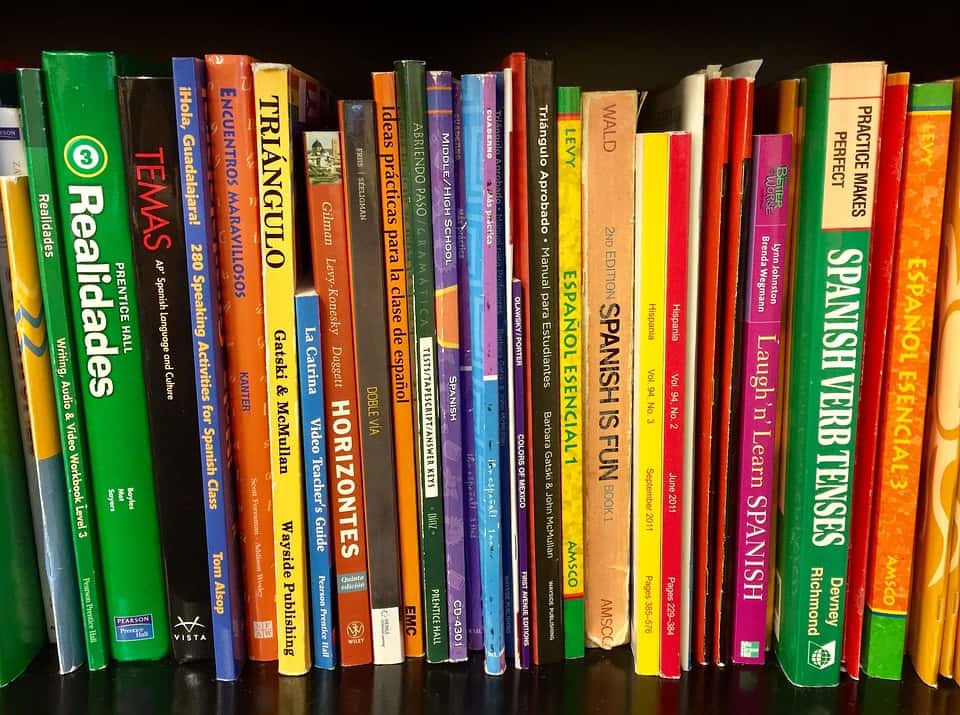 Yes, they do speak English in Costa Rica, especially in a lot of the tourist areas and hotels. So you will be able to find some people that you can talk to. The main language in Costa Rica though is Spanish. The way that you’d say hello in Costa Rica would be hola. Another way you might hear the locals say hello, is buenas which means good in Spanish.

A popular Costa Rican greeting is Pura Vida which means pure life. They use this phrase to mean this is living, perfect, wonderful or great. To shorten it would be Pura. You’ll also find a Creole English language in Costa Rica called Mekatelyu. It’s spoken along the coast of the caribbean. 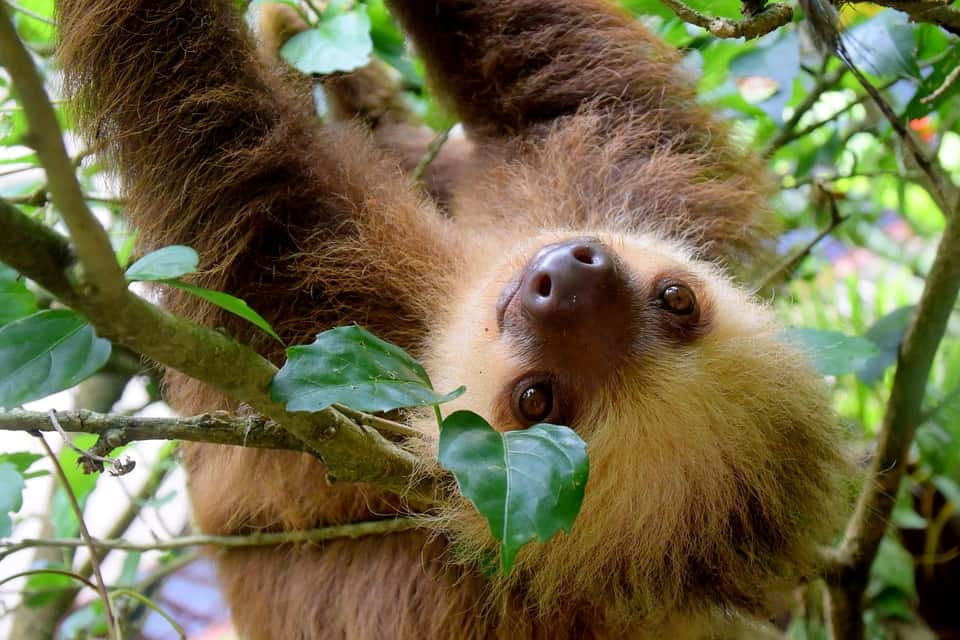 You’ll see some unique animals in Costa Rica. Like the White Headed Capuchin Monkey, which is one of four types of Monkeys in Costa Rica. The other types are Squirrel Monkeys, Spider Monkeys and Howler Monkeys. There are also six types of wild cats in Costa Rica that are mostly nocturnal and in the rainforest. The Ocelot, the Margay, the Jaguar, the Puma, the Jaguarundi and the Oncilla.

The Sloth is another unique type of animal found in Costa Rica. The Two Toed and Three Toed Sloths. They spend most of their time on trees feeding on leaves. The national animal of Costa Rica is the White tailed dear. The national bird is a yiguirro and the national aquatic animal is the West Indian manatee. 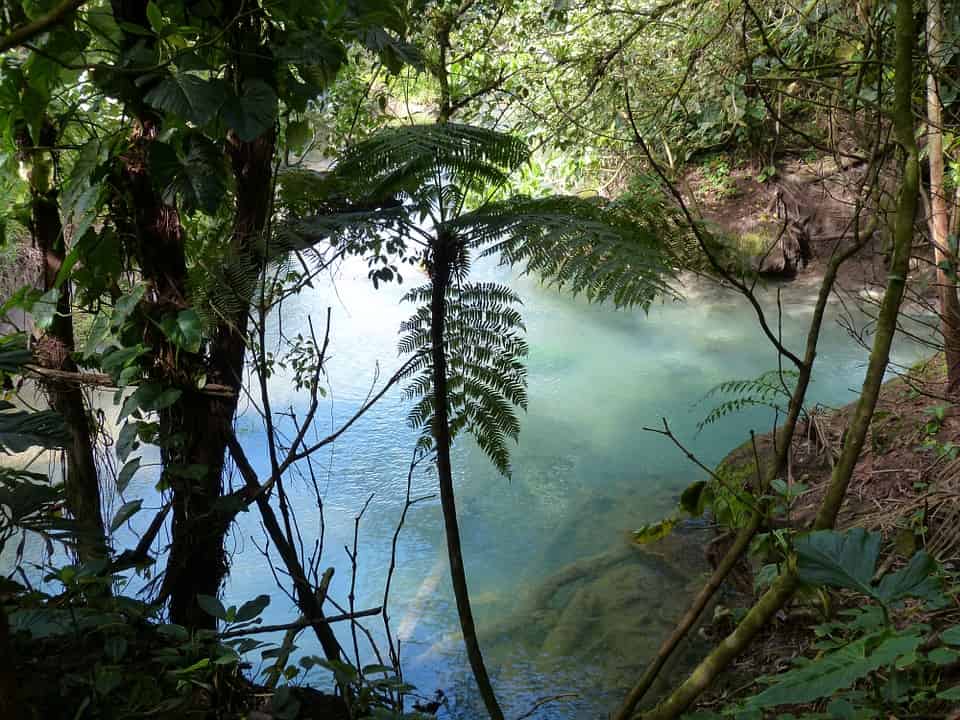 There are many volcanic formations and active volcanoes that are in Costa Rica. Because of that, there are a lot of these hot springs that are all around the country that you can get in. You’ll find some of them at certain resorts. These resorts have incorporated these hot springs into their spaces. They’ll have plenty of warm and hot water pools to choose from.

You’ll also be surrounded by Costa Rica’s lush vegetation. There are also some that are part of a resort, but they allow non hotel guests to buy a day pass. Because of that, these kind can get a little crowded. Then there’s some you can enjoy that are free that are not part of a resort. 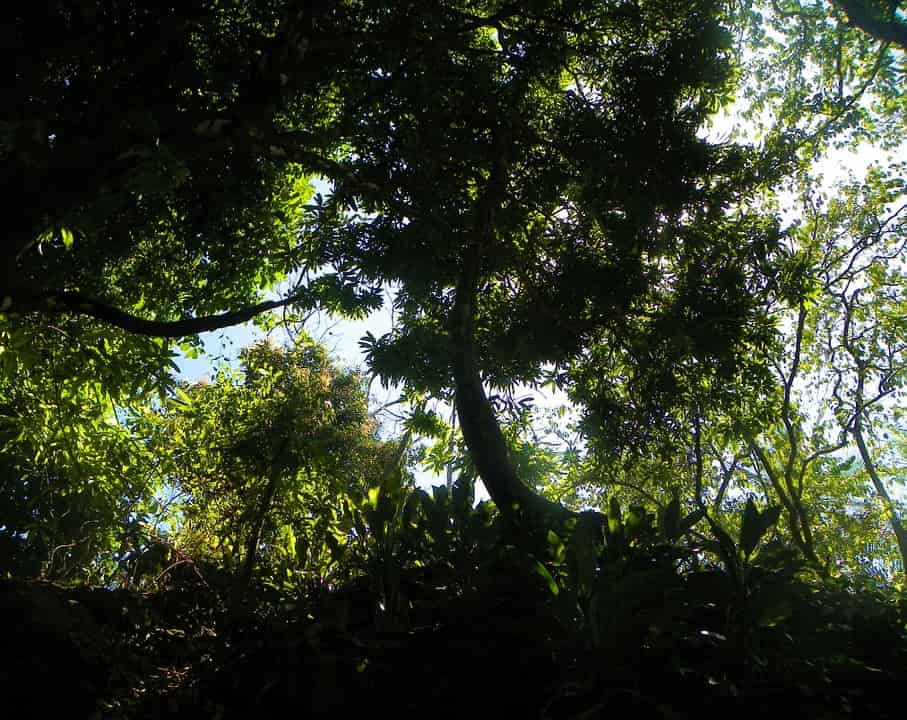 Over half the area of Costa Rica is made up of forests. There are three different kinds. It has tropical dry forests. They have lower elevations and are found in the North Pacific coast of Costa Rica. They don’t get as much rain, but still have some awesome flowers and trees. Then there are the rainforests which are in the southwest part of the country.

These forests get the most rain and have a lot of plant and wildlife. The other type of forest in Costa Rica is the cloud forests. You can find these on the slopes of some of the volcanoes and also on some of the mountains. They can be some of the most beautiful areas to see in Costa Rica.

Are there any more fun facts about Costa Rica that I missed? If you know of any, please let me know what they are in the comments section below.

Pin it for later: 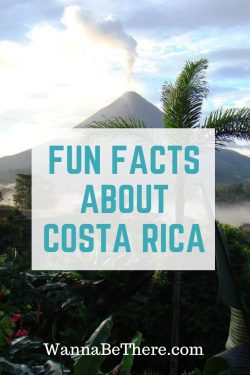